Trailer music & sound design. Meeple Story: Road to Dicehalla. Why it sounds like it sounds

Meeple Story: Road to Dicehalla is a cross-platform MMORPG with tabletop mechanics. I have written the trailer soundtraсk and have made the sound design. Here is the trailer:

When i got the brief, i started to think about the main jingle: a theme, that represents the game concept. My idea was to create a melody, that player will hear in the end of an every trailer. And associate it with the game. In Overwatch trailers there's always the «Tu du-du-du du-du-du» melody. It can be played in different keys and on different instruments to match the score of a video.

I wrote a melody depicting a brave, but a little bit clumsy hero, crossing a river, awkwardly leaping from rock to rock, and finaly landing on two legs. You can hear it the end of the video. No one's actually leaping in the trailer. But this little jingle tells a story.

I mixed the jingle with a couple of famous tracks and sent the result to developers to convince them that the jingle can be matched to anything. They actualy agreed.

Then I started to compose. First part, when the bird is flying over the Dicehalla, is calm and epic. Party theme is a jig. After that there's an «Everything's changed» scene and gameplay reveal. Developers said that I can do anything, but the gameplay part should be brutal. I decided to make both parts caricaturely brutal. So I used a classical trailer low brass «Tu-duuuuuu» in one part and the blockbuster metall tune in another.

To make the trailer more droll I used some contrast sound effects. That's why warriors has high voices and epic moment the first transformation into meeple sounds like bubble burst.

All sound effects, the music, and the main jingle — everything tells something about Meeple Story game and it's mood. I believe that composition is not only a music, but every sound too. And the composition should not only support a visual part of a game or a video. The composition should tell its own story, add something to an art and a plot. And I've told one about Meeple Story: Road to Dicehalla with the music and sound design.

Leave comments below or tag me on Twitter if you have a question.

If you find a mistake in the text — let me know and I'll fix it.

Connect with me on LinkedIn!

Trailer music & sound design. Meeple Story: Road to Dicehalla. Why it sounds like it sounds 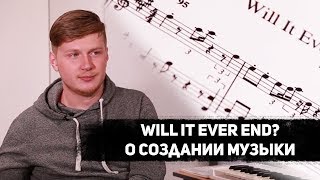